Home What is it? Benefits Physiology Process About Us Contact Us 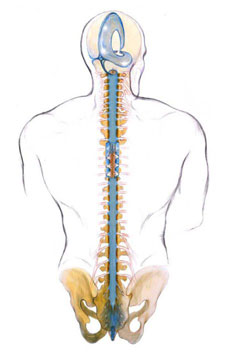 In order to facilitate the expansion of the brain, the different bones making up the skull are joined together by semi-rigid, fibrous joints called sutures. It is the sutures that allow the skull bones to fold over themselves to ease the passage of birth. Even as we grow older, these sutures maintain a degree of flexibility and follow the brain into the flexion (expansion) and extension phases, and it is this movement of the skull that can be felt by the CranioSacral practitioner.

From the cranial base down to where the sacrum joins the hips, and to the coccyx, the spinal column provides a protective covering and the outlet between the vertebrae for the spinal nerves that run to all the different organs and points in the body. These nerves are also surrounded by the cerebral spinal fluid and are influenced by the rigidity or lack of movement that may exist within the spine and sacrum.

Because the body’s tissues are mainly composed of fluid, the physics of fluid dynamics dictate that the cranial rhythm and the extension and flexion of the brain are also reflected throughout the body and can be “tuned into” at any point of the body allowing the practitioner to locate and treat disturbances that occur within the body.